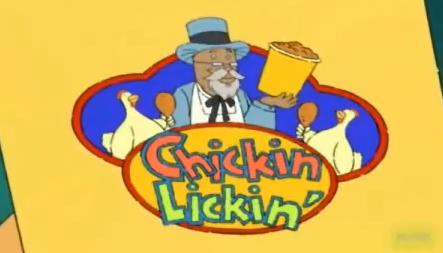 Chicken Licken has a restauraunt at Mill Creek Mall. They also tried to buy out the Sugar Bowl, until Sue Ellen� organised a protest group trying to save the Sugar Bowl.

The Chicken Licken business is owned by Boregard Poulet, who resembles Colonel Harland Sanders, the owner of Kentucky Fried Chicken.

It is supposed to be a parody of Kentucky Fried Chicken, but there is also a Chicken Licken restaurant in South Africa and Botswana owned by Golden Fried Chicken PTY LTD.

The commercial for Chicken Licken features Boregard Poulet inside of his barn, which is a disco party in side, with dancing chickens while Boregard says the menu.

Chicken Day was celebrated when the Chicken Licken store opened in Mill Creek Mall.� This "holiday" resembled christmas, because the children would line up and sit on Boregard Poulet's� lap saying what they want for Chicken Day, just like when children sit on Santa's lap and say what they want for christmas.

Retrieved from "https://arthur1996.fandom.com/wiki/Chicken_Licken?oldid=4034"
Community content is available under CC-BY-SA unless otherwise noted.